Back to Robert's story

Robert E. Brasher, Sr., affectionately known as Poppa, went to be with the Lord on Friday, February 28, 2020 at age 77. He is survived by his loving wife of 58 years, Kaye Tubbs Brasher; three children, Bobby Brasher (Michelle), Robin Strickland (Scott), and Kristy Castor (Jeff); seven grandchildren, Danielle Gaddis (Jeff), Levi Brasher, Katie Brasher, Aselefech Strickland, Jackson Castor, Mitke Strickland, and Audrey Castor; and great grandchildren, Callie Gaddis and Brodie Gaddis; siblings, Clifford Brasher, Pat Brasher (Amy), Betty Thompson, and Fran Voegtle; godchildren, Heath Wilson (Elsa), Hayley Wilson, Kelsey Smith (Chad), and Nicole Peterson (PJ); and nieces, nephews, and other extended family and friends. Robert was preceded in death by his parents, three brothers and three sisters. He proudly served his country in the U.S. Army National Guard. Robert was the Little Debbie Snack Distributor in the North Jefferson area for over 30 years. He was a member of Gardendale First Baptist church for 49 years. He sang in many gospel quartets for over the years. Robert was a very loving husband, father, and grandfather who will be missed dearly by his family. Visitation will be Sunday, March 1, 2020 from 6:00 p.m. until 8:00 p.m. at The New Gardendale Funeral Home. The funeral service will be Monday, March 2, 2020 at 11:00 a.m. in the chapel of the funeral home with burial to follow at Oakwood Memorial Gardens.
Published on February 29, 2020
To plant a tree in memory of Robert E. Brasher, please visit Tribute Store.

Plant a tree in memory
of Robert

A place to share condolences and memories.
The guestbook expires on May 29, 2020.

What should I write?
Add photos Add an emblem
Share

Carolyn Wilhite
I’ve known Robert since we were teens, and he married my best friend. Throughout his life he was always a kind, good hearted soul who loved the Lord and his family. He had a beautiful smile and voice that is unforgettable. You are with Larry now; Kaye and I will see you both when our call comes. Until then, keep singing in that Heavenly choir! 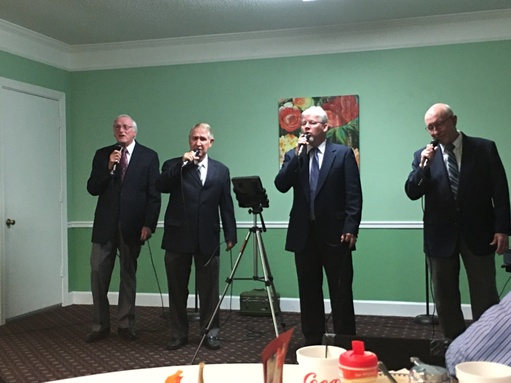 What a beautiful man. May the Lord comfort his family. I grew up from a small girl seeing Robert at the grocery stores around Gardendale, then at Wal-Mart. He told my grandson, hey I have known her since she was your age. He is five. Robert was a very good man who seemed to love life. He always had a smile to give to whom ever he met. Heaven gained a wonderful person.

Martha McCurry
So sorry to hear this. I did not know him personally but we always spoke and talked to each other when he was stocking Little Debbie products.
A lot of the times he was on his knees and I always said to say a prayer and me while he was down there!!! He said he was happy to oblige.
Dean Bain
To Kaye and family, may God comfort you in the loss of your loving
husband, father and grandfather. It was always a pleasure to see
him in stores as he worked. His smile and greeting truly will be
missed.
Connie Ezekiel
I am so saddened to hear this. I lived by him for yrs. remember seeing him in stores on his job. He was a very sweet person. My condolences goes out to his family.
View all